Short on space? Grow your own local, sustainable food against a city skyline

Farming brings urbanites closer to the food they eat and, when executed correctly, can also address some of a city’s most pressing eco-challenges.
By Marisa Belger 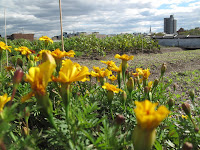 For the majority of my life in New York City, the words “urban agriculture” meant nothing more than a collection of chipped ceramic pots clustered together on a fire escape. I spent years tending to (then ignoring) those pots, which housed a variety of struggling herbs. Wilting basil, dried-out Italian parsley and undernourished lavender — I had it all.