The most recently created fluorescent fish are angelfish - the biggest and brightest transgenic glowing fish in the world so far.
Taiwan's largest exporter of ornamental fish, the Jy Lin Company, says it has successfully inserted a fluorescent protein gene into the reproductive organs of the fish. It allows them to produce glowing offspring.
The company says its new breed of fish took more than three years and approximately 10 million Taiwan dollars to develop because the reproductive cycles of medium-sized fish are harder to control than their small-sized counterparts.
The angelfish are members of the biological family Cichlidae. Cichlids make up the majority of fish seen in most aquariums.

"With the medium-sized cichlid fish, its biological cycle cannot be controlled by artificial lightings. Plus the low number of fertilized eggs makes the collection of fertilised eggs a challenge - it will take a very long time with the micro-injection method,” said Lin Yu-ho, the developer. 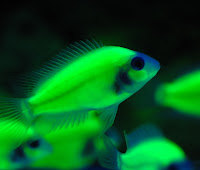 Electroporation is a process whereby an electrical pulse is used to create passages through cell walls for the transplantation of foreign molecules - in this case the fluorescent protein gene. 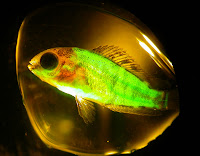 Lin said he chose angelfish because of their unique fin lines and elegance when they swim. The fish has also been one of the most popular aquarium pets since the early 20th century.

The fluorescent angelfish has a transparent body with the skeleton and internal organs visible, especially when placed under the blue light.

The first generation of the 96 fluorescent angelfish was obtained two years ago. The later generations have been modified for the most stable and strongest glow.

The company is now researching other colours and the possibilities for adapting the technology for even bigger fish.

"There are a few directions in the future. One is to use different fluorescent genes of the coral reefs in Taiwan - they will give different hues to the fish. Also, we have successfully produced small and medium sized fluorescent fish,” says Lin.

“The next step is for it to apply to large sized fish, such as the ornamental fish that are 25 to 30 cm long. But their maturity time and the reproduction cycle are even longer, so we are looking at results in two to three years from now."

Although the medium-sized fluorescent fish will not be commercially available until it passes the standards set by genetically modified organism (GMO) laws - to ensure it poses no harm to the natural environment - the angelfish has already attracted wide attention and won Taiwan's major biotechnological awards.

Once they become marketable, Lin hopes to sell the angelfish at the wholesale price of USD$30 per fish.