By Charles Redell報導, 2011/9/16
In the wake of President Obama's jobs speech last week, the national conversation is intently focused on growing jobs -- and particularly green jobs -- in the weak economy. 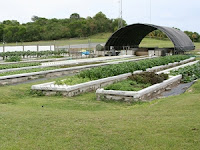 
This week, we saw a new twist on green jobs, and one that promises something of a Holy Grail of sustainability: Creating jobs to grow sustainable food products at an economically viable scale that will be consumed in the local foodshed.
本週我們看到了一個新的綠色就業的企機，並承諾永續發展的使命：創造綠色就業，從永續的糧食產品創造經濟規模增家本地食材的消費規模。
That's the pitch from the Recirculating Farms Coalition (RFC), which launched earlier this week. The group says the type of farms and farming it promotes can achieve those goals and more, including urban job creation.
這是農場聯盟（RFC）的一大突破，稍早本週該組織說，都會農場和都會農業，絕對可以實現創造城市 的就業機會。
The coalition is promoting sustainable, closed-loop farms that grow local, fresh food and, it says, create green jobs using clean, recycled water in place of soil. The farms can produce plants, fish, or a combination of both -- a method called aquaponics. In its first year, the group aims to increase public awareness of recirculating farms and their benefits, help develop better technology and approaches for the 30-year old practice and work with policy makers to make it easier for new farms to start operations.
該聯盟是促進可永續循環的農場，來生產新鮮食物，它說，創造綠色就業，使用潔淨的循環水的農場。農場能產生植物，魚類，或者養耕共生。在第一年，集團目標是增加循環農場和提高公眾意識，幫助開發更好技術，規劃30年新農場的營運。
Recirculating farms reuse as much as 99 percent of their own water and recycle organic waste from fish into nutrients for other crops. They are endlessly customizable so can be placed in just about any underused, or otherwise unwanted urban environment, according to the Coalition's executive director Marianne Cufone.
"These farms are scalable," she said, speaking after touring one covering just 1/20th of an acre located behind a strip mall in Orlando, Fla. "I've seen some the size of a desktop growing herbs and goldfish and I've seen ones covering acres and acres."
The crops grown on recirculating farms can vary widely. On the small Florida farm she'd just seen, Cufone said lettuce and herbs were being grown alongside Tillapia. Other farms grow produce like tomatoes and eggplants and a variety of higher-end fish stocks.
Bail and mint growing in towers on the rooftop of Bell Book and Candle restaurant in the West Village (Manhattan), New York.Urban farms are taking off across the country. Will Allen, whose Growing Power farm is a model of green urban farming discussed the "good food revolution" on GreenBiz.com in 2009, and Leanne Tobias profiled the rise of urban farming this summer.
One of the biggest hurdles for commercial recirculating farms is permitting. Some jurisdictions view them as labs while others view them as traditional agriculture operations, Cufone says. Neither one fits the bill, so RFC is working to change permitting and to develop a checklist for potential operations to help smooth the permitting and inspection process.
On the federal level, RFC aims to convince elected representatives and government agencies [PDF] that recirculating farms are economically better, safer environmentally and healthier than ocean-based aquaculture.
From a sustainability perspective as well as an economic perspective, advocates of recirculating farms have some strong numbers to back them up.
While Cufone wasn't able to give me an ROI on an aquaponics system, the manufacturer of a home-based aquaponics kit conducted a study [PDF] that found they can pay for themselves in 2.5 years. And taking the raw production numbers from one well established farm, commercial-sized farm shows what kinds of returns might be possible.

The farm, which has been operating at the University of the Virgin Islands (UVI) for the last 20 years, costs $40,000 annually to operate its four fish tanks and six 100-foot vegetable beds. It produces 1,400 cases of leaf lettuce and 11,000 pounds of fish annually. Just using back-of-the-envelope calculations based on food prices at Safeway.com, that's at least $99,000 in retail value of fish (if it's tilapia) and almost $73,000 in lettuce (if it's romaine lettuce, at 18 heads per case).
Financially, a farm like this earns its keep, and environmentally, the story is much the same. The UVI aquaponics farm produces all that food while using just shy of 19,000 gallons of water [PDF]. One head of lettuce produced there requires about 7.5 gallons of water. On a traditional farm, it would need just shy of 16 gallons to grow, according to RFC.
The job-creation potential of recirculating farms, which RFC is promoting, is a bit muddier. The idea is to "go back to where we once were," Cufone said. "We used to farm and grow food for ourselves and maybe for our neighbors who were good at other things. We're moving back to creating our own jobs."