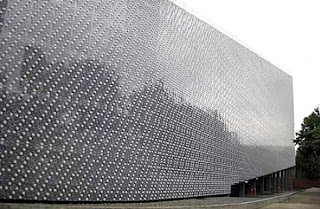 Taiwan's plastic bottle building -- EcoARK Exhibition Hall.
Not just a bottle picked off the street. Polli-Brick from Hymini is made from recycled PET bottles. The building can be disassembled and then reassembled elsewhere. Looks like that might take a bit of time though as the building is 85 meters long (279 feet). 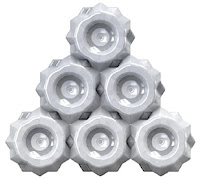 EcoARK PET bottles to be spread among 100 schools
GREEN USE:The bottles used to build a pavilion at the flora expo will be reused in creative projects to raise environmental awareness among local communities
Staff Writer, with CNA

A total of 1.52 million recycled plastic bottles used to build a pavilion at the Taipei International Flora Expo will be taken apart and sent to elementary schools nationwide to raise environmental awareness, the building’s sponsor said yesterday.

The Far Eastern Group, commissioned by the Taipei City Government to build the EcoARK — a boat-shaped exhibition hall made of PET bottles — said it would work with the Ministry of Education to distribute the bottles to 100 elementary schools for “green use.”

Schools that were damaged by Typhoon Morakot in 2009 will be given priority, group chairman Douglas Hsu (徐旭東) said.

He said all the honeycomb-shaped PET bricks used to build the EcoARK will be reused in creative projects so local communities can join in on the environmentally friendly action.

For instance, he said, the bricks can be reassembled into bus stops, greenhouses, galleries or even sheds for keeping livestock.

“Since the bottles were collected from the public, we think it is best that the materials go back into the hands of the people,” Hsu said.

The group said the inspiration for EcoARK came from the large number of PET bottles recycled in Taiwan every year — about 90,000 tonnes.

EcoARK, also known as the Pavilion of New Fashion, attracted more than 2 million visitors at the expo. It was featured on the National Geographic Channel’s Megastructures, which was aired in 168 countries in 34 languages, with an estimated audience of 370 million. 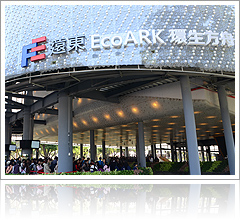 2010 Taipei International Flora Exposition, certified by the International Association of Horticultural Producers (AIPH), was held in Taipei, Taiwan from November 6, 2010 to April 25, 2011. The main concept of this exposition was to convey the essence of horticulture, science, and environmental protection, all of which were perfectly accomplished by the FE EcoARK – Pavilion of New Fashion. Designed for a new eco-friendly life, FE EcoARK grabbed worldwide media attention during the construction period and was always packed with people waiting in a long line after its grand opening.

Elaborate the New Green Era via Digital Signage
FE EcoARK, sponsored and operated by the Far Eastern Group, was the world’s first green building made from recycled PET bottles. It was built by 480,000 PET bricks which were reshaped from 1.52 million recycled PET bottles. The whole pavilion included seven areas and each and every detail reflected the idea of creating a fashionable and eco-friendly life via high technology.

In order to let visitors fully understand the design and planning of the unprecedented plastic building, the Far Eastern Group consulted Paoan, CAYIN’s premium partner in Taiwan and installed nine 42” LCD displays and CAYIN digital signage players at the main entrance as the promotional channel. As a result, visitors in the queue could come up with preliminary ideas about the green building and reduce impatience waiting in a long line. 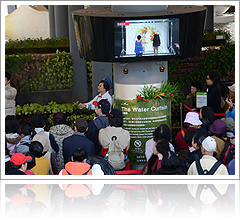 CAYIN’s digital signage solution conveyed the design of this modern-day “Noah’s Ark” with high quality video playback. Visitors were able to learn the whole amazing process including: soliciting 1.52 million discarded PET bottles, grinding the bottles into plastic flakes, molding 480,000 PET bricks, and assembling and constructing the FE EcoARK. This high-tech and eco-friendly journey started from the waiting area at the entrance where green ideas were taking root in people’s minds.

At the Pavilion of New Fashion, FE EcoARK had another mission; to present all kinds of fashion and art. Therefore, EcoARK hosted over 200 fashion exhibitions and artistic events in six months. To present visitors with the creative concepts of each piece of artwork, the organizer deployed CAYIN’s digital signage players in major exhibiting areas. Visitors could appreciate works of art while simultaneously viewing a video on the screen of the designers’ inner world.

Reduce Energy and Operating Cost with CAYIN Digital Signage Solutions
CAYIN’s digital signage solution is equipped with powerful playback and managerial functions, largely reducing the operating cost for FE EcoARK. Administrators can schedule playlist to playback different multimedia content automatically at a designated period of time. Therefore, information can reach visitors both inside and outside the building effectively.

Moreover, CAYIN’s digital signage players can turn on and off remote screens automatically in accordance with the exhibition activities. Volume can also be lowered automatically at night. Judging from the number of visitors, administrators can sit in the office and shut down players immediately to save energy. In addition to high quality presentation and powerful remote management, these environmentally-friendly designs are one of the main reasons why the organizer chooses CAYIN’s digital signage as the information platform in this big exhibition.

During the six-month exposition, CAYIN’s digital signage solution successfully assisted Far East Group in conveying the green ideas to all visitors in FE EcoARK, the world’s first building made from recycled PET bottles. The building was also featured in “Megastructures”, the National Geographic Channel’s popular series, and will be broadcasted in 34 languages to 166 countries around the world.

2010 Taipei International Flora Exposition
The 2010 Taipei International Flora Exposition, authorized by the International Association of Horticultural Producers (AIPH), was the first international certified standard exposition that Taiwan has ever held. This exposition opened on November 6, 2010 and continued presenting the most spectacular scenery and more than 7000 cultural performances all the way until April 25, 2011. The six-month exposition covered 91.8 hectares of exhibiting areas and was conducted on the riverside and 14 featured parks. The basic design concept of this exposition was based on the symbiosis theory which merges humanity’s basic needs in the desire to pursue happiness and extends the boundary of imagination, thus creating a future full of countless possibilities.

A special thanks to Far Eastern Group who adopted CAYIN’s digital signage solutions in the Pavilion of New Fashion (FE EcoARK), so that CAYIN could be part of this great exposition. 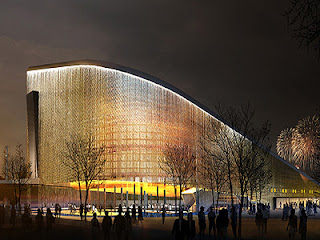