THE FUTURE OF AQUAPONICS LOOKS BRIGHT AT BROOKS

Aquaponics technology being developed in Canada is likely to morph into a new way to organically grow fresh fish and vegetables. In cold climates, that will mean more profitable use of greenhouses.

Canadian research has shown that growing plants utilizing fish wastes in greenhouses in cold climates is significantly superior to growing them hydroponically in the same greenhouses using inorganic fertilizers dissolved in water.

This was a most startling conclusion reported at the International Conference and Exhibition for Soilless Culture-2005 in Singapore last fall.

I expect it to trigger a cascade of global interest in aquaponics technology, in which intensive aquaculture provides fish wastes for intensive horticulture.

The report was presented by Dr. Nick Savidov, an Alberta Agriculture, Food and Rural Development (AAFRD) researcher at the Crop Diversification Centre South facilities at Brooks. Among many other projects, he is comparing greenhouse production of plants under both aquaponic and inorganic hydroponic regimes.

A major collaborator in the project was Dr. James Rakocy of the Agriculture Experiment Station of the University of Virgin Islands. He is widely acknowledged as a leading authority in freshwater aquaponics science and technology.

The accompanying bar charts well sum up Dr. Savidov’s report to the Singapore conference, and support the importance of the directions he and his colleagues are now taking the science of aquaponics.

The first bar chart (2003) shows that aquaponics, before it has fully developed its all-important microbiology to change fish wastes to plant food, is not as productive in greenhouse growing of food plants as inorganic hydroponics. 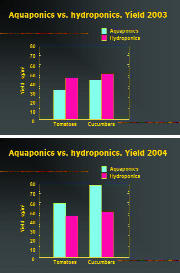 However, the second chart (2004) shows that when the microbiology is fully operational after six months, it leaps ahead of inorganic hydroponics in the comparison. It means earlier maturity of greenhouse crops under aquaponics, and much heavier cropping.

Aquaponics could improve the economics of investment in greenhouses in colder climates, due to greater productivity of the system.

The additional revenue from fish sales is a bonus. Two income sources with the one infrastructure means greater financial resilience for small operators, and two products transported instead of one when deliveries are made.

Some of those unconvinced questioned his inorganic nutrient choices, while others suggested aquaponics could become a possible problem technology with human disease transfer, or as a source of snail parasites. One of the major points in favour of inorganic hydroponics in some countries is that it breaks the water-borne disease or parasite cycles.

On all counts, Dr. Savidov and other aquaponic experts at the conference made effective rebuttals.

Dr. Savidov, a researcher for 20 years in inorganic hydroponics, said he, too, was surprised by the results of the aquaponic and hydroponic comparison. It has led him to double-check the hydroponic nutrients used, and the data.

Dr. Rakocy testified that in 25 years of UVI aquaponic production using fish wastes to grow fresh vegetables for local consumption, not one disease or parasite incident had occurred.

As a journalist writing about aquaponics since the early 1980s, I was also able to testify that Australia’s successful seven-year experience with commercial aquaponics production had not revealed any human disease or parasite problems. Indeed, the aquaponic growers had the advantage of the healthy “organic” cachet for their produce.

Dr. Savidov said the “unknown growth factor” in aquaponic production was worthy of further research – not only to better understand aquaponics technology, but also to see if it could be applied to improve inorganic hydroponics production.

More than 60 different food crops and varieties were tested in the Alberta greenhouse, and 24 were chosen for trials on production levels. Five were greenhouse vegetables and 19 were herbs.

An economic feasibility study is now under way.

The Canadian study will be of major interest to greenhouse growers worldwide. This is not just because of the revenue benefits, but because it also solves one of the major problems of inorganic hydroponics, this being the disposal of waste water still containing plant nutrients. It has become, or will soon become, a major expense for growers throughout Europe and North America, where increasingly stringent waste water disposal regulations are being applied.

In aquaponics, there is only sludge residue for disposal from the fish wastes as they pass through to the organic hydroponic growing of plants. The crop production process cleans the water so it can be returned for re-use in fish tanks. In this way, aquaponics is an even more miserly water user than inorganic hydroponics. This will become increasingly important in a world where climate change challenges may make traditional food production technologies in soil either uneconomical or difficult to implement.

Most relevant is the rising cost of inorganic nutrients for hydroponics, because many are wedded to the heavy use of petroleum energy. On the other hand, fresh water fish farming (especially when using herbivorous or omnivorous fish species) might eventually be able to take advantage of the recycling of urban and rural organic matter via worm farming.

Dr. Geoff Allan, research leader for aquaculture with the New South Wales Department of Primary Industries, said future expansion of global aquaculture “will depend on finding additional feed ingredients. Success with ingredients such as lupins, wheat and terrestrial animal protein meals in Australia is very encouraging.”

That is also where research into the refinement of aquaponics technology is heading, especially in making it better fit a variety of low-technology and high-technology objectives.

Geoff Wilson is a freelance writer in Queensland, Australia.