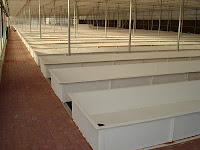 Growing veg with help from 50,000 fish
從5萬條魚開始養耕共生
Caline Malek, Nov 6, 2011
ABU DHABI // It won't grow you a niçoise salad, but a new Dh6 million aquaponics centre in the capital can achieve the next best thing - the single system is fine-tuned to produce both fish and salad leaves. The Baniyas centre, the largest of its kind in the world, is ready for use and is due to start generating food as early as February.

It combines traditional aquaculture - fish reared in tanks - with a system that uses fish waste as fertiliser for its hydroponic vegetable tanks, a process known as aquaponics.
It will soon start producing fish and vegetables, hopefully reducing the amount of food the UAE imports. Currently, the country outsources about 85 per cent of its food, making it vulnerable to price and supply shocks.
"The system replicates nature," said Dr James Rakocy, who has spent 30 years developing the technology at the University of the Virgin Islands, and has acted as a consultant for the project.
The Zayed Higher Agricultural Centre for Rehabilitation and Development is due to receive its first batch of thousands of seeds from the US next week, plus 50,000 tilapia fingerlings - juvenile fish - from Holland. Other types of vegetables will follow, including tomatoes, cucumbers and okra.
"It's an intensive production of fish in tanks and the water is continually circulating from those tanks into vegetable hydroponic beds," Dr Rakocy said.
When fully up and running, the centre should be able to produce up to 300,000 heads of lettuce a year and 200 tonnes of fish. and filters that turn the ammonia-based waste from the fish into food for the plants. The plants absorb those nutrients for growth.
Dr Rakocy said that having such a good supply of nourishment means the plants "grow extremely rapidly because they have all the nutrients and water they need".
His tests have found that basil grows three times more quickly than normal under aquaponic conditions, and okra 17 times faster.
"It's much better than field production because in the soil, you have insects and not enough water or nutrients," he said. The plants also purify the water, which is then recirculated back to the fish.
The system, set up by JBA Agritech, is also efficient in its use of water, using far less than field production. Its tanks contain 400,000 litres, which should be usable for a year or two.
Dr Rakocy contrasted this with typical hydroponic systems, which have to keep adding fertiliser.
"After three months, the chemicals get out of balance in hydroponics and you have to discharge all the water and start again."
The technology has been running for 10 years in the Virgin Islands.
"It's being done in a country that has virtually no water for agriculture, so this is the technology of the future," said Dr Rakocy. "You'll be able to produce a lot of food using a only little bit of water."
The key is the system's use of bacteria. The filters and cleaning tanks contain nitrosomanas bacteria, which convert the waste ammonia into nitrites, and nitrobacter bacteria, which process the nitrite into nitrate. This can then be used as fertiliser.
"The fish excrete ammonia, which is toxic," said Dr Rakocy. "These bacteria use the ammonia for food and convert it to nitrate, which is not toxic."
Thanks to its automatic recirculating system, aquaponics does not require much monitoring nor measuring.
There are also organic chemicals in the tanks that give the plants a better taste.
"The whole system is managed by one water pump," said Jabber Al Mazrouei, the centre's chief executive and operational director. "It will produce 450,000 kilos of food per year."
He hopes the Government would eventually subsidise the system, to help farmers install it as a replacement for older methods.

The first produce would be ready by the end of February, with the first fish in May. The food would be sold at hypermarkets across the UAE.
The system is also efficient in terms of power. "The amount of electrical energy that we use is very small, so the ecological footprint is nothing," said Dr Rakocy.
Even so, the team was considering using alternative energy - such as solar or wind - to power the pumps.
The one-stop factory for niçoise salad - which typically consists of tuna, potatoes, lettuce, tomatoes, shallots, eggs and olives - is a way off.
Lettuce will be in the first phase, and tomatoes not far behind. But potatoes are a problem as the system is only good for vegetables that grow above ground.
Other projects in the works to grow potatoes locally, including one by the FSC (see article below).
And while more adventurous chefs could use tilapia, tuna and anchovies require salt water.
"That is still at the experimental stage worldwide," said Mr Al Mazrouei. More than that, he said, "olives can only come from trees and eggs from a poultry farm"
editor link: cmalek@thenational.ae