Urban farming is enjoying a much-needed renaissance nowadays, with many city dwellers turning to at-home gardening, buying urban greenhouse-grown goods, or even raising their own micro-livestock. While the legality of such activities depends on local regulations, those who are able to do so often use some kind of chicken coop, be they permaculture-style "chicken tractors" orhigh-end, outrageously pricey types.

Seen over at Design Milk, the HØNS urban chicken coop by Danish traveller-designer Anker Bak is approached as a do-it-yourself puzzle that can be constructed with a handful of bolts, O-rings and string in under two hours. The idea is to have a structure for a chicken that can be placed on a city balcony, where the chicken can live out-of-doors while providing a family with fresh eggs, and endless hours of interaction with a chicken.

HØNS has some nice features that anyone would want for a chicken: a nest, places to roost, a central pipe for feed, a water bowl and an area where the chicken can bathe in sand (one of their essential, instinctual behaviours).

However, one major issue with the HØNS coop is that it seems way to small for one chicken -- with the scale chicken seen in the photos it looks no larger than a birdcage. Unless there are some miniature breeds of chicken out there, this coop just screams "claustrophobic chicken." From a chicken's standpoint, it seems that the restrictive dimensions would probably need to be jacked up quite a bit, probably sizing it out of most urban balconies. 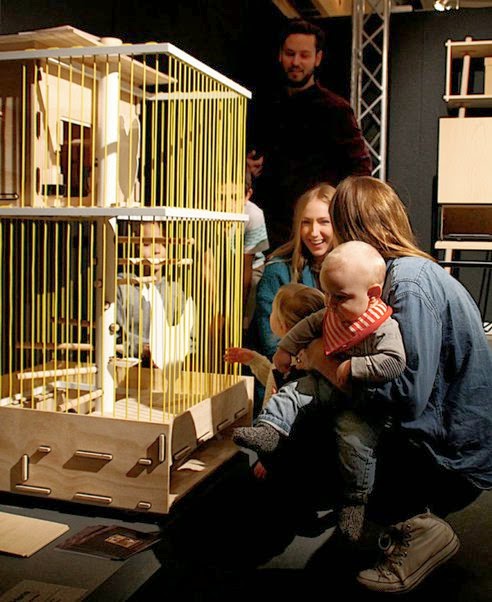 It's an attempt to solve the problem of raising happy chickens in the city, but perhaps this cage-like coop could be combined with the chicken running free-range in the apartment -- while wearing chicken diapers of course.