If you want to be successful with your aquaponics system, you will need to understand how the nitrogen cycle works. I will explain what the nitrogen cycle is, why it's important, how it progresses and how to ensure it works efficiently in your established system. Armed with this important information, you'll be well on your way to growing fish and plants just like the pros do. 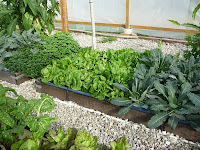 What is the Nitrogen Cycle?


The nitrogen cycle is what powers aquaponics. There are several key players in the overall nitrogen cycle, but the ones who tie it all together are nitrifying bacteria. If these nitrifying bacteria are present in sufficient numbers to efficiently process toxic ammonia and nitrite into relatively benign nitrate, we consider the system to be "cycled". However, this doesn't simply happen overnight. It takes some time for the bacterial population to establish, usually between several weeks and several months, depending on various factors. When a system is just embarking on this process, and until it has completed, we say the system is "cycling". The words "cycling" and "cycled" are really just words used to describe the state a system is in, with regard to the overall process of nitrification.

The Cycling Process Begins
For all practical purposes, the nitrogen cycle starts when fish food (rich in nitrogen), or some other nitrogen source (like ammonia), is first added to the system. Fish food is the primary source of nitrogen input in an aquaponic system. Fish consume the fish food, utilizing about 25% of the nitrogen in the food for growth, and then excrete the rest as ammonia. This ammonia takes on two different forms in water, un-ionized ammonia (NH3) and ionized ammonia, called ammonium (NH4+). As previously mentioned, ammonia (NH3) is highly toxic to fish, but ammonium (NH4+) is not. Typically, only about 10% of the total ammonia nitrogen (TAN) in a system consists of this toxic ammonia form, but it doesn't take much to kill fish, so it has to be dealt with quickly. The system's pH plays a significant role in determining the ratio of ammonia to ammonium. Temperature plays a role as well, but to a much lesser extent. Without getting too terribly technical, the higher the pH and temperature, the higher the percentage of toxic ammonia you'll have as part of the overall TAN mix.

The Nitrification Process
Once there is sufficient ammonia in the system, the first group of nitrifying bacteria (primarily Nitrosomonas and some others) begin converting it by way of oxidation into nitrite (chemical compound NO2-), and the population increases rapidly as a result. We call this group of bacteria "ammonia oxidizing bacteria" (AOB). During this phase of the cycling process, the system will typically experience a considerable spike in nitrite levels and a reduction in TAN (ammonia/ammonium). However, just like ammonia, nitrite is also quite toxic to fish, so we rely on another group of bacteria to continue the cycle. Now that nitrite is present, a new group of bacteria (primarily Nitrobacter and some others) begin to populate the system. They convert the nitrite by way of oxidation into nitrate (chemical compound NO3-). We call this group of bacteria "nitrite oxidizing bacteria" (NOB).

Nitrogen Uptake by Plants
The vast majority of terrestrial (land dwelling) plants prefer their nitrogen (N) source to be in the nitrate form. Secondarily, they'll also take up ammonium, but in the presence of readily available nitrates, they'll take up ammonium in much lower amounts. Many aquatic (water dwelling) plants on the other hand tend to have a higher preference for ammonium over nitrate. These differences of N uptake preference between terrestrial and aquatic plants has frequently caused confusion for those just entering the world of aquaponics. Since aquaponics is primarily focused on terrestrial plant production, we're going to keep it simple and restrict this discussion to terrestrial plants and nitrates. Think of nitrates as "plant food".

As long as you continue to add fish food, and the nitrification process is not hindered or interrupted, your system will continue to produce nitrates. These nitrates will then be "consumed" by your plants. If there are not enough plants growing in the system, nitrate levels will climb higher and higher. If you have an overabundance of plants in relation to the amount of fish food you are adding, the nitrate levels will fall, and your plants will compete for them immediately as the become available. Plant growth will then suffer.

Maintaining the Nitrogen Balance
There is no such thing as a self-balanced aquaponics system. Maintaining a healthy, productive aquaponics system requires some monitoring, and making adjustments when necessary. We strongly recommend routinely checking your system's water temperature, pH, ammonia, nitrite and nitrate levels. There are numerous electronic meters available for this, but they tend to be quite expensive, and are really only suitable for very large systems due to the high cost. There are also chemical test kits available, which are extremely affordable and provide very accurate results for our needs. We routinely recommend the API Freshwater Master Test Kit. It costs around $25 or less in the US, will last for about 800 total tests, and is available at many pet stores, garden pond stores and online suppliers. Armed with a test kit, you will be able to determine what adjustments you need to make and when you need to make them.

Here are the most common scenarios you will encounter that require adjustments:

Declining pH - Generally speaking, you will want to maintain your cycled system pH around 6.8-7.2. If it falls below this range, the nitrifying bacteria will be adversely impacted. You need to add a base. There are commercially available products for this, but you can also use relatively common chemical salts like sodium bicarbonate, calcium bicarbonate, potassium bicarbonate, calcium hydroxide, calcium chloride and many others. Specific recommendations are beyond the scope of this article, but will be featured in a later article related to maintaining pH levels.

Rising ammonia levels in an established system - In a properly performing aquaponics system, ammonia levels should barely be traceable. The AOB's should be "processing" them almost as quickly as they become available in the system. There are numerous causes of elevated ammonia levels, but here are several of the most common: Overfeeding, inadequate biofiltration, interruption to the AOB population

Rising nitrite levels in an established system - In a properly performing aquaponics system, just like ammonia levels, nitrite levels should barely be traceable. The NOB's should be "processing" them almost as quickly as they become available in the system. Some of the more common causes include: Inadequate biofiltration, interruption to the NOB population or nitrate to nitrite "reversion" or denitrification caused by Anoxic/anaerobic (low/no oxygen) areas in the system where heterotrophic bacteria "convert" existing nitrates and accumulated solids into nitrite which the NOB's are unable to keep up with.

Extremely elevated nitrate levels in an established system - It is usually ideal to have some stockpiled nitrate exist in the system, but if it begins to climb to extremely elevated levels, you could potentially risk a resulting nitrite spike due to denitrification. Either you need to decrease your fish food input, or even better, add additional plants to take up the excess production.

Inadaquate or trace levels of nitrate in an established system - Either you need to increase your fish food input or reduce your plant mass by culling or harvesting.